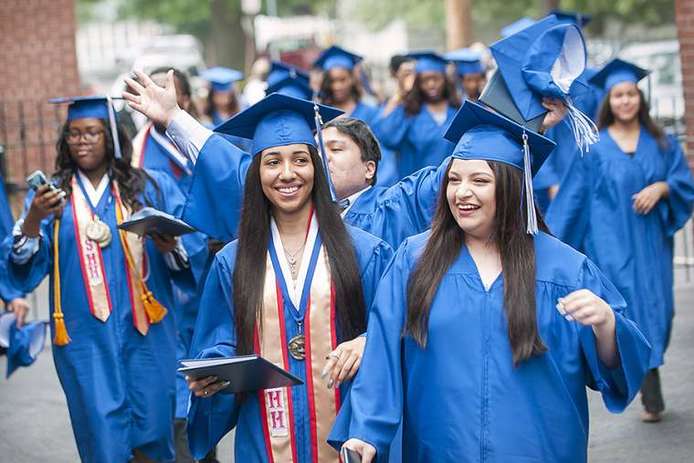 As urban Catholic schools nationwide are closing their doors, it may come as a surprise that the Catholic Cristo Rey Network says it is on-pace to expand to a total of 50 schools within the next decade. The network says that it can provide Catholic education in low-income areas for a fraction of the cost of other high schools.

What’s the secret? Through a unique arrangement called the Corporate Work Study Program, Cristo Rey students are placed in entry-level corporate positions for five days a month. Instead of being paid for their work, students earn their tuition.

The Corporate Work Study Program began in the mid-1990s, when Chicago Jesuits were seeking to better serve the city’s Latino community. After surveying residents, they discovered that they most desired a college-prep high school in their neighborhood. When issues of funding came up, the Jesuits assigned to create this new school reached out to a “very creative, original thinker” for ideas.

“They asked [the consultant] for some ideas about how to sustain a private school for students and families who could not afford to pay for it. He came back with the suggestion that every student have a job,” Fr. John P. Foley, S.J., founder of the Cristo Rey Network, told CNA.

“That was the origin of the Cristo Rey concept.”

Students are allowed to work despite being underage due to a law that permits students enrolled in school-supervised and authorized work-study program to be lawfully employed.

More than 3,000 businesses, including Deloitte, PwC, CIBC, Jones Day, United Airlines, and Ernst & Young, employ Cristo Rey students throughout the school year. Initially, the Jesuits reached out to business-owning alumni of Jesuit schools to propose the idea of the Corporate Work Study Program.

According to Foley, the Jesuit connection provided a great assist to the program.

“It almost seemed enough for those alumni to hear that this was something the Jesuits were thinking about doing for them to say yes, they would give a job. It was almost a blind act of faith in their former teachers,” said Foley.

The first Cristo Rey school, Cristo Rey Jesuit High School, opened in Chicago in 1996, with Foley as president. There are now 32 Cristo Rey schools across throughout the country, and the Cristo Rey Network is currently on target to open an additional eight schools by 2020.

About 10,000 students attend Cristo Rey schools, and on average, their parents pay about $1,000 annually in tuition fees. Nearly eight out of 10 Cristo Rey students are eligible for free or reduced-price lunch, and almost all students are people of color.

Unlike other networks of Catholic schools, Cristo Rey schools are administered by a variety of religious communities, including the Jesuits, Dominicans, Salesians, and Franciscans. Others are run by a particular diocese, such as Cristo Rey Boston High School.

About 40 percent of students in the Cristo Rey Network are not Catholic, and students are welcome to attend the school regardless of what faith they practice, or if they’re not religious at all.

“All of our schools teach a standards-based religious studies curriculum in which all students must complete four years of religious studies courses,” said Alyse Faour, an advancement associate with Cristo Rey, in an interview with CNA. In addition to the required religion classes, there are student ministry programs on campus to assist with spiritual formation.

According to its website, students are admitted to Cristo Rey schools regardless of their abilities, and the average student begins high school about two grade levels behind. Despite this, about nine out of 10 graduates will enroll in college, which is a higher rate than enrollment levels of some high-income students.

Cristo Rey schools currently exist in 21 states, plus the District of Columbia. Schools in Texas, California, Florida, Virginia, Nevada, and Oklahoma are currently in development and on target to open within the next three years.

We're thankful for YOU!

In this season of gratitude, we are thankful for all the support that... more

This video is about Howley Scholar Promo more

Lionettes Wish You a Happy Halloween!

Happy Halloween from the Hi-Steppers!

This video is about My Movie 19 more

Learn more about our Return to Campus Plans for the 2020-21 School Yer! more

We are One Body: Saint Martin Virtual Gospel Choir

This video is about We are One Body Easter more

This video is about Sophomore Howley Scholars more

This video is about My Movie 8 more

This video is an update for new students at Saint Martin de Porres... more

Howley Scholars Class of 2020 Thank You

Thank you Howley Family Foundation for providing scholarships for our students! more

Thank you Dr. Louis and Mrs. Virginia D'Isidori for providing 10 students with... more

Congratulations to the 18 seniors who achieved a 3.5 cumulative GPA or higher!... more

Hear from Cleveland business leaders on the importance of the Corporate Work Study... more

You Make a Difference!

We are thankful to our Corporate Work Study Partners who make a difference... more

17 Reasons why we love Saint Martin for 17 incredbible years! more

Students and families share why they love our teachers! more

Thinking of our Future Lions

Saint Martin Virtual Gospel Choir- We are One Body

This video is about My Movie more

I Have A Dream at Saint Martin

Relationship Building and the PGA

Work Study and the PGA

Why I Love Saint Martin... Clifford

Why I Love Saint Martin... Josh

Why I Love Saint Martin... Maya

Why I Love Saint Martin... Emareion

Why I Love Saint Martin... Destyne

Our New Home in Under 60 Seconds

Saint Martin: The School That Works

Cristo Rey: The School the Works on 60 Minutes

Impact on Student Learning || A Step Along the Way

A Step Along the Way

Learn about what it means to be a Saint Martin Lion from the... more

A Message from Rich Clark

The School That Works