« back to spotlight stories 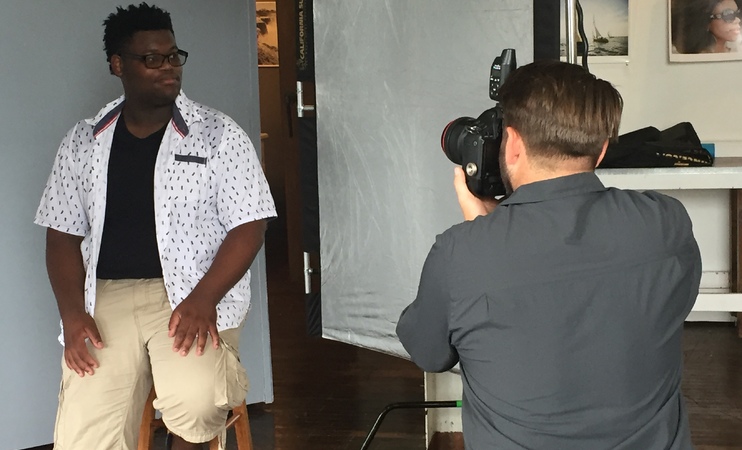 As part of an assignment at St. Martin de Porres High School, Hampton created a 10-page science fiction play centered around space travel and submitted it to Dobama Theatre’s 40th annual Marilyn Bianchi Kids’ Playwriting Festival. In celebration of young U.S. playwrights, the 17-year-old’s play was one of eight submissions out of 230 accepted to be professionally directed and performed by Cleveland-area professional and community actors in June.

Star Crossed: Inspired by science and science-fiction, Hampton wrote The Slipstream Drive in which a space station team gets caught inside a time loop and struggles to get back to Earth. Although it took Hampton nearly four months to write the play, it was his first foray into the genre. “The only person who knows they’re in a time loop is the emergency medical hologram,” he says. “When you think of plays, you don’t think of sci-fi or technology, you think of Shakespeare and nontechnical language. So, I wanted to try something new.”

Program Director: With dreams of majoring in computer engineering, Hampton worked as an intern for John Carroll University’s information technology department during his first two years of high school. He learned how to quickly diagnose issues with hardware and set up servers and new computers in the IT department. “Computer engineering is the future,” says Hampton. “With all these different advances we have, I don’t think computer engineering is ever going to go away.”

Fortune Teller: Hampton’s goals for the future are wide-ranging, but he hopes to one day be a CEO for his own tech company producing hardware and software. “I would rather work 80 hours a week for myself than work one hour a week for someone else,” he says. “If I work for myself, I know exactly where the money is going.”

Netflix and Code: Of course Doctor Who and Star Trek are at the top of his most-watched list on Netflix, but Hampton also spends several hours a week learning how to code different algorithms for fun. This year, he created a program that could organize all of the files on his computer based on the year they were created so he wouldn’t have to categorize them manually. “Maybe an organization can use that algorithm to sort financial statements into different categories and timestamps,” he says.